Dr. Barbara and Skip Newell, Penofin's owners, saved Seabiscuit's owner's barns and eventually rebuilt one of them into one of this country's unique performing arts centers. The story of this historic preservation is one of inspiration and imagination.

But first, the background. Charles S. Howard Jr. had retired Seabiscuit to Ridgewood Ranch about one half hour north of what is now the Newell home. Howard owned a second ranch in Potter Valley used as a get-away in the 1940s.

You see, thousands of tourists and fans wanted to visit the horse that beat War Admiral at Pimlico in Baltimore in 1938. The race was the most listened to radio broadcast of all-time. Howard, although always a gracious host, needed a respite from all the visitors. It was his Potter Valley ranch that he turned to.

Over time, after the death of Howard, the barns gradually decayed. The wood weathered, some of the boards rotted, and the barns seemed slated for firewood. That's when the Newell's stepped in to stop the destruction and find a new home for the barns.

A team of preservationists took apart the three barns, marking each board with a numbered lumber tag. The boards were then moved about a mile down the road to the Newell home and reassembled. Wood damaged beyond repair was replaced; however, most of the lumber was salvaged and restored using Penofin. Old-growth redwood, once slated for the burn pile, was given new life.

When the largest barn went back up at the Newell's farm, it created an acoustic wonder with its Pennsylvania Dutch gambrel-roofed shape and its second story that rises sixty feet above the floor. When this old-growth redwood building was restored piece-by-piece, contractors replaced the upper-level floor weakened by 250 tons of raw hay it held every year since 1920.

When workers replaced the redwood floor, the acoustic affect of sound bouncing off the floor and the redwood arches in the 2,800 square foot building was astounding. The Newell's knew immediately that it had to become a very unique performing arts center and named it the Penofin- Seabiscuit Performing Arts Center.

The Newells built a large stage at one end of the huge second floor auditorium. Technicians hung theater lighting from the rafters complete with a control board for many unique effects. A permanent sound system was added with a "flying" speaker system allowing the sound technicians to aim the speakers for the audience depending on the seating and the performer's needs. The Penofin-Seabiscuit Performing Arts Center can seat 400. The Newell's never charge their guests and feed wonderful food to everyone.

The 11th Annual Penofin Jazz Festival was just held at the Center, the "theater-in-the-round" perfect for jazz. The speakers are adjustable overhead and the sound was absolutely perfect. The stage is returned to the north end of the hall for other music events. Over the years, Ralph Stanley from the film "Oh Brother, Where Art Thou?" and the Grand Ol' Opry, with many tours of Europe and the Far East as well as across the U.S. since 1946, appeared in the Penofin-Seabiscuit Performing Arts Center to cheering fans and admirers. The Center has also had the great bluegrass group John Reischman and the Jaybirds for three appearances as well as the great fiddler and singer Michelle Lambert and the local old-time group Movin' On. The Center is also the site of the Penofin Wood Finish Dealers, Distributors, and Sales Representative Conventions. 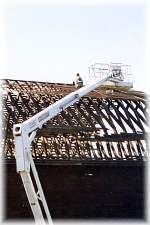 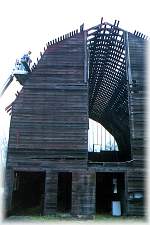 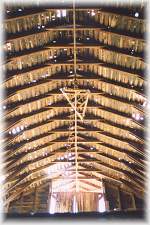 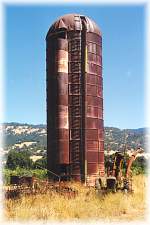 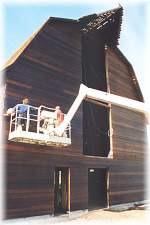 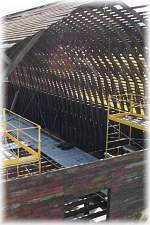